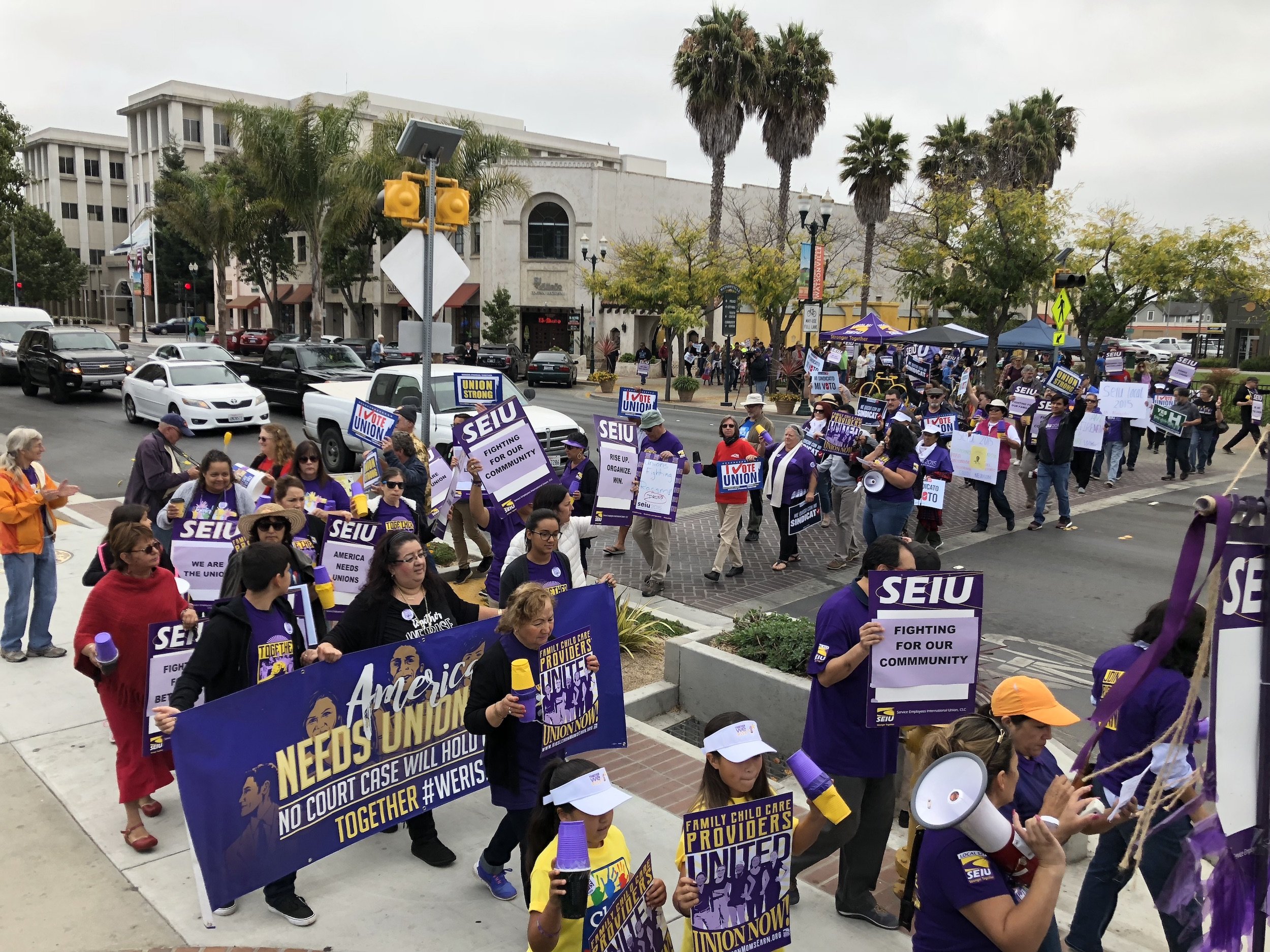 (Watsonville, CA) In the face of growing attacks from wealthy special interests and billionaires, hard-working people from Monterey, Santa Cruz, and San Benito Counties rose up today and celebrated the vital contributions we make to life on the Central Coast during our community’s Labor Day event.

“Our union not only helps us serve the community and provide for our families, but our strength lifts the wages and benefits of all workers in California – both union and nonunion,” said Alicia Metters, an SEIU 521 member and Social Worker for Monterey County Social Services. “By rising up and standing together, we’re helping to address racial and gender inequality and build stronger communities. We’re all in this together – the fight for good, union jobs is for all of us.”

SEIU 521 members were joined by union members from aross our community, including Family Child Care Providers who are fighting to have a union and the right to collectively bargain.

“We are fighting for a system that ensures all parents have access to dependable care and all providers earn livable wages and a strong, united voice on the job. We demand that all children get the strong start they deserve and that providers receive the training, resources, and living wages they deserve,” said Anna Rodriguez, an SEIU 521 member and Family Child Care Provider from Watsonville. “Labor Day is our time to be inspired by the hard-won victories of the past that were possible because of workers like us and to look towards the future with the knowledge that with hard work, a better world is possible.” 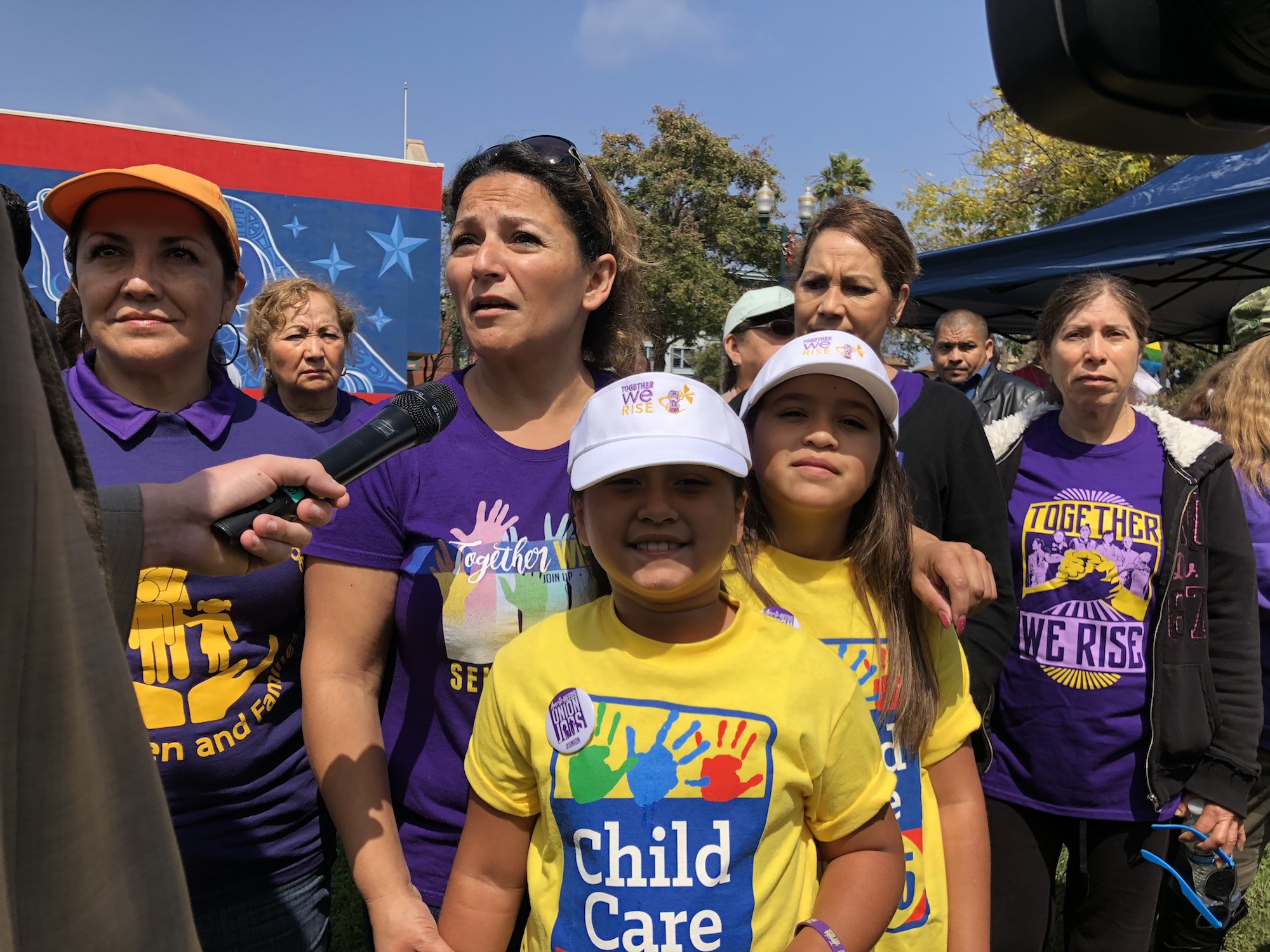 “I am proud to stand on this stage with SEIU 521 Family Child Care Providers. For too long, Providers have not received the support, pay, or benefits they deserve,” said Assemblymember Mark Stone (D-Monterey Bay), who represents California’s 29th Assembly District. “Hardworking people everywhere deserve a union and a voice, and these providers are no exception.”

California is seen as the leading state for policies that support the diverse working families that make up our communities, and Labor Day kicks off an election season that is being watched more than most. Elected officials and candidates including  all publicly expressed their support for union rights.

“We’re rising up and using our voice and our vote to hold candidates and politicians accountable. We need to elect leaders that will stand behind working people – not billionaires and special interests,” said Cesar Lara, Executive Director of the Monterey Bay Central Labor Council. “We insist that politicians take action to help workers join together in strong unions to raise wages, gain healthcare coverage, get a fair return for our work, and build thriving communities.”

According to a recent study by the UC Berkeley Labor Center, our unions help improve the wages and benefits of all workers in California – both union and nonunion[1] – as well as help address racial and gender inequality. On average, California’s union women earn 26% more than nonunion women. Similarly, Black workers earn 19% more and Latino/a workers earn 40% more on average under a union contract[2].

Service Employees International Union, Local 521 represents 40,000 public- and nonprofit, private-sector workers in the California’s central Bay Area region and in the Central Valley. Under a Community First vision, we are committed to making sure the needs of our community, and the vital services we provide our community, come first. We believe our communities thrive when residents, leaders and workers recognize that we are all in this together when it comes to our safety, health, and well-being.

Comments about Hundreds of Central Coast Union Members Rise Up & Celebrate our Contributions to our Community are welcome. Off-topic comments and other violations of our community guidelines may be withheld or removed. Comments do not appear immediately after posting.